Join over 400,000 parents in building a healthy co-parenting relationship.
More convenient than in-person or zoom classes.

This is the Most Highly Recommended Online Parenting Class in the U.S. 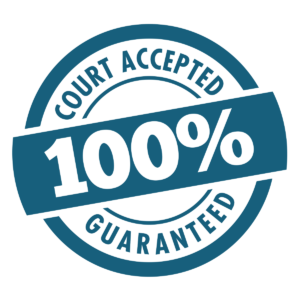 In Clark County, all divorcing/separating parents with minor children are required to attend a parenting seminar called a "COPE" class.  Children in Between Online allows you to start the class immediately. Complete the class entirely online and print your certificate all within about 4 hours. Our program is the only approved class that is evidence-based and proven to help you and your children.

Our course is very affordable, priced at $50.95, and over twenty-thousand parents have taken our course in Clark County.

Take this parenting class completely online (not a zoom course) wherever you feel comfortable.

Log in and out as needed over 30 days to complete the course.

Once completed, you can download, print, or email your certificate of completion.

Take on Any Device
Our class is optimized to fit all screen sizes. Take on your computer, laptop, tablet, or smartphone.

After each video scenario, CIBO presents the user with guided questions to explore how each problem can be addressed, and to increase your understanding of the situation. 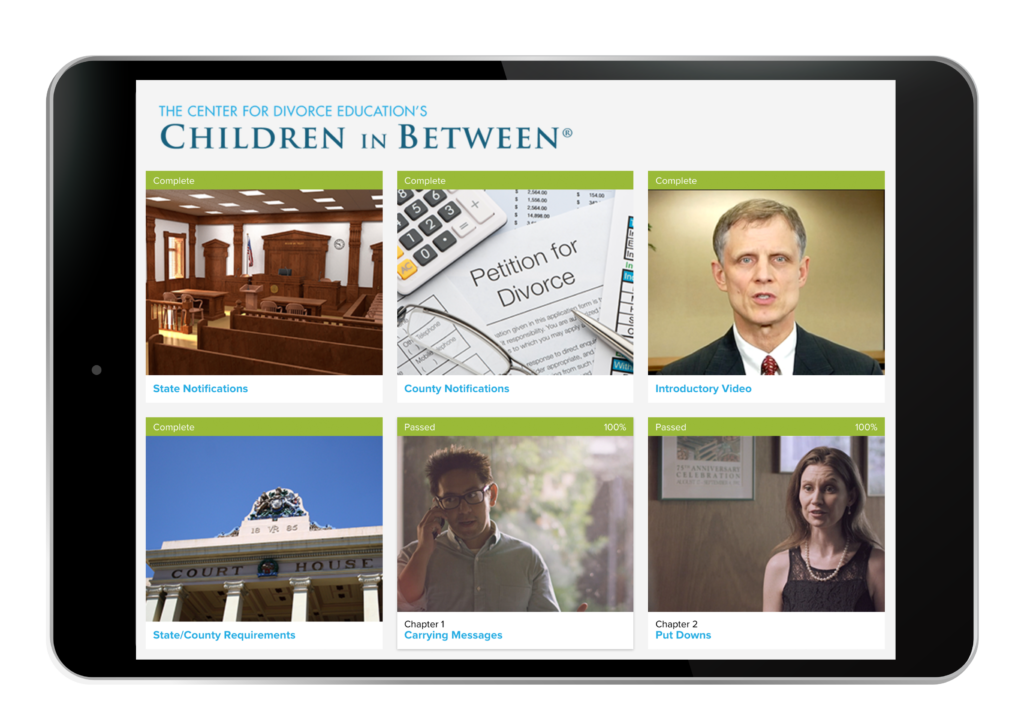 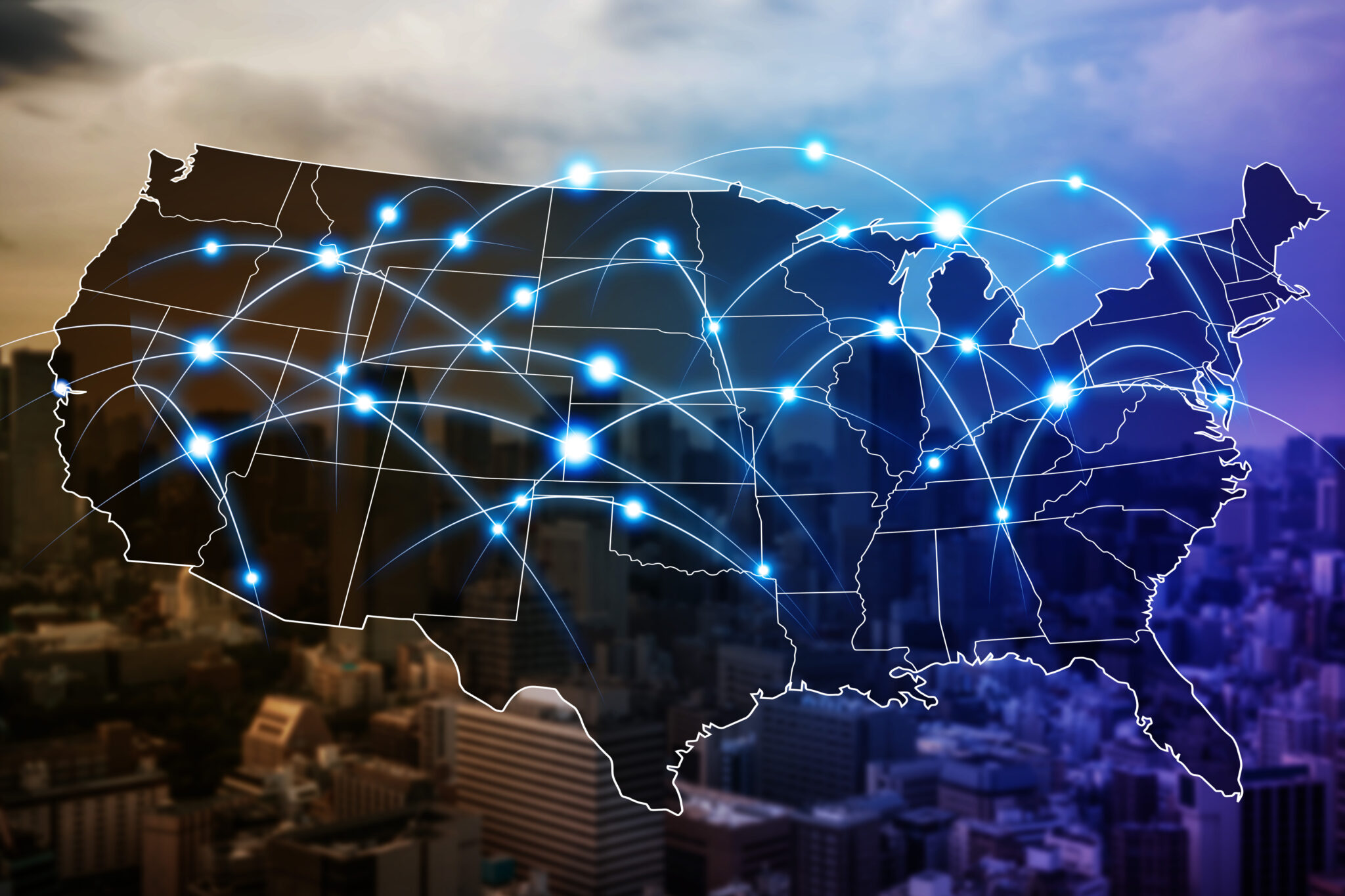 CIBO has been approved as the only accepted parenting class provider in some of the largest court systems in the country including Cook County (Chicago) and Clark County (Las Vegas). We are an approved provider in Maricopa County (Phoenix, AZ) as well. Today, the parenting course has been accepted in more than two hundred and fifty judicial districts and is approved statewide in Florida, New York, Minnesota, and Nebraska.

Co-parenting can be difficult. It is a team effort that takes practice and continued learning.

With Children in Between Online, parents learn the most common pitfalls parents make and how to overcome obstacles and lessen stress. 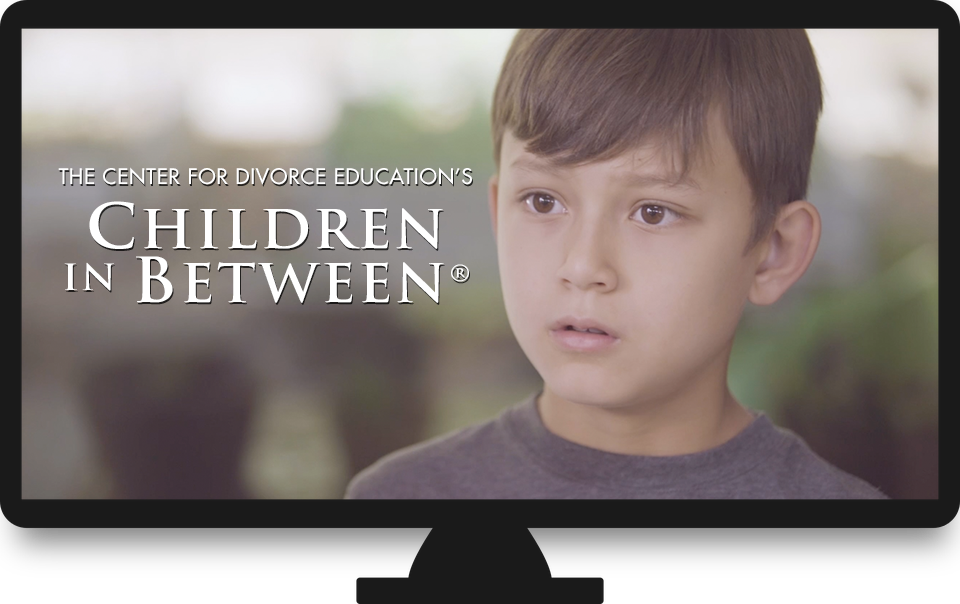 Who is taking Children in Between Online?

Over five thousand parents each month are
taking this parenting class on their computers and smart phones in 45 states.

Since its inception, The Center for Divorce Education has been dedicated to helping parents and children deal with the difficult process of divorce and separation. Over this period, our parenting class has evolved based on continuing research in the field. Today, tens of thousands of divorcing/separating parents make use of our highly effective interactive parenting course “Children in Between Online” for reducing the stress of divorce and separation.

Our interactive, skills-based approach has been recognized by experts among the top programs being offered today. Donald A. Gordon, Ph.D., the Executive Director of CDE, is also our program/curriculum developer. Dr. Gordon is a clinical psychologist with an expertise targeting the reduction and prevention of delinquency. During his forty plus years of working with families, Dr. Gordon has studied the effects that different strategies have on reducing conflict within a family, both with parents and children.

In the early 1980’s, Dr. Gordon and his colleagues at Ohio University noticed a common characteristic among the youth with whom they were working -- namely that many of them came from homes where their parents were divorced, divorcing, or never- married parents living apart. After doing some further investigation in the literature, Dr. Gordon and his colleagues confirmed that divorce is among the key risk factors for delinquency. From there, Dr. Gordon and his colleagues shifted their energy and research focus to try and identify specific strategies that could help reduce parental conflict. The goal became to change the behavior of parents who unknowingly place their children in the middle of their conflicts that create the most harmful of consequences, loyalty binds.

Based on his research in the early nineties, Dr. Gordon developed a parenting class that could be standardized and offered by social service agencies, mental health agencies, and private counselors. This class “Children in Between” was purchased by hundreds of providers who, in turn, presented the curriculum to divorcing/separating parents in a classroom setting. While most parents today are taking our online parenting course, there are still more than a hundred agencies who present our material and video content in a live classroom setting.

Following the broad acceptance of our live class, Children in Between, (CIB) co- parenting program, in 2007, Dr. Gordon adapted the material into a highly interactive format that could be offered to parents everywhere via the Internet. Today, over five-thousand parents monthly have access to this parenting class on their computers, smartphones, and tablets.

Over 450,000 parents in all fifty states have either taken our class online or in person.. The online version, Children in Between Online (CIBO), launched in 2008. Over 5,000 parents each month are taking the class on their computers and smart phones in forty-five states. In a bid competition with dozens of other online classes, CIBO has been approved in some of the largest court systems in the country. Today, this parenting class has been accepted in more than two-hundred and fifty judicial districts.

The research evidence on Children in Between (CIB) resulted in the program's being listed on the National Registry of Evidence-Based Programs and Practices. The ratings of numerous controlled studies on CIB were above average in quality of the research and the findings. CIB is one of only two parenting classes listed on NREPP for co-parenting or divorce education.

CIB was also selected as a Model Program for SAMHSA (Substance Abuse and Mental Health Services Administration). This selection was based upon a review of all of the research for CIB, and the program's readiness for dissemination nationally. Only 52 programs were designated Model Programs, out of over 400 submissions.

Today, we continue to improve and revise the program based on feedback from parents, agencies, and courts. The class was completely re-filmed and revised in 2018 and won a Telly Award and W3 Award for content.

Although many parents are apprehensive about taking a parenting class, 9 out of 10 parents who complete our course say they would recommend it to other parents. Our class is online, easy to understand, and can be taken on any internet-connected device. We are proud of the work that we have done and plan to continue our mission of advocating for children.

Real quotes from real parents: What were the most helpful and useful things you learned in Children in Between Online?

"I felt like I learned a lot of valuable information, particularly in remembering to Stop-Look-Listen, ways to be mindful, and to remember that the way my children respond to our divorce is directly related to how much conflict they are exposed to."

"In-depth information and a complete guide to working agreements out with former partners."

"The videos were definitely helpful, because they're pretty relatable."

"Statistics about children of divorce. I think it helps me realize how important it is to work on communication and conflict management."

"Learning more regarding brain functionality, and how it plays a major role in reactions to situations. Self-Talk, learning of ways/new techniques to deal with my child's emotions given the change in their father and I's relationship, and Active Listening."

"Using "I" messages, active listening, stop-look and listen, learned how the amygdala operates and what it is."

"How to manage my anger and not jump to conclusions. How to communicate effectively with my children's' mother."

"This was a surprisingly good and useful course. Learning about the physiological aspects of our brain functioning with stress and conflict was very interesting and enlightening. I found the skills related to "I" messages to be useful and the focus on mindfulness techniques."

The Center for Divorce Education

© 2022 The Center for Divorce Education

CDE's Children in Between is a skills based program that helps children and parents deal with the children's reactions to divorce. This is the most highly recommended online parenting class in the United States.

The program is based on research that identifies the most common and stressful loyalty conflicts experienced by children of divorce.